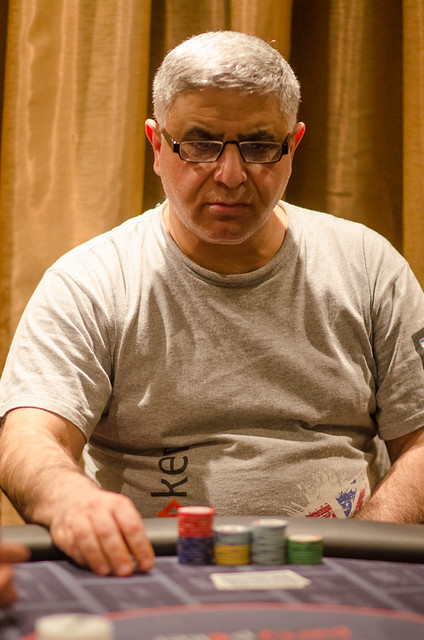 We’ll be back with live coverage of Day 1b’s flight from 2pm today at the Aspers Casino here in Newcastle, so see you then! 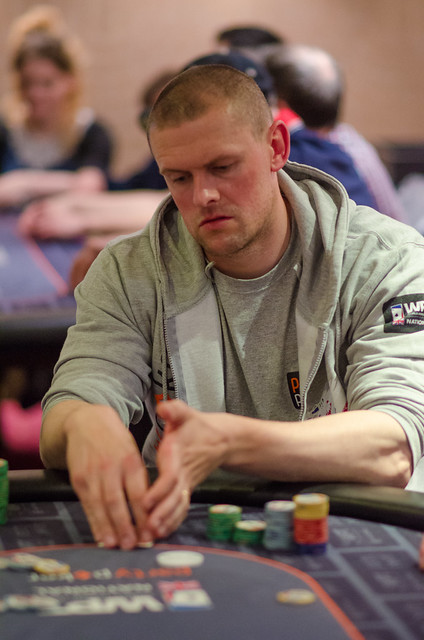 Paul Castledene has just eliminated a player to leave his stack looking healthy with just a few minutes to go until the end of this Day 1a.  He held

on a flop of

and was up against his opponent’s

.  Pretty cruel – Paul had more bl0ckers than the NFL Draft, and held when the turn and river came

respectively.  Castledene is stacking up around 72,000 right now!

We will have a full run-down of the chip-counts up on here as soon as possible, but please bear with us – there are a lot of stacks for the dealers to count, with 68 players left as we move towards the final few flops.

Solinas Angelo is one of several players to have travelled all the way from Canada to play after qualifying online via partypoker. With a strong  overseas presence, will we see our first non-European winner this #WPTNUK season? 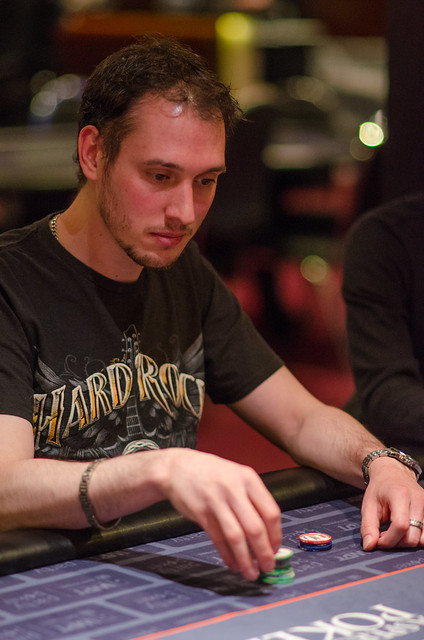 Ian Simpson got the better of Mike Hill in a big pot earlier.  With his 7-8 all-in pre-flop against Mike’s pocket kings, Simpson spiking a straight on the river to double to 38,000 and leave Mike on fresh air.  Well, fast-forward several hours and the wily veteran  has won it all back from the 2013 IPO champion. Having only ten big blinds, Simpson found Ace-King and got it all into the middle, called by Mike’s pocket queens, which held. 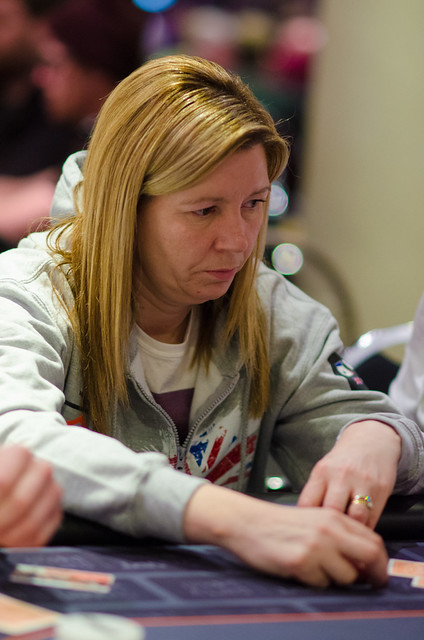 Gillian Martin (pictured, above) is one of our longest-lasting ladies here on Day 1a of the WPT National Event in Newcastle.  She has just won an all-in, managing to get her opponent to fold what may (or may not) have been a big hand.  But in a way, she lost from the hand.  Here’s how.

– a decent enough bet, four times the big blind and more at the time, and Gillian fairly quickly shoved over the top for 16,300 total.  Her opponent (with 20k behind) made the fold, and Gillian showed him (and then of course, the whole table)

.  Top two pair with a backdoor possibility and a very nice hand.  But why did she show?  In doing so, she gave away information, free of charge to a player who may well consider his bet-size and subsequent fishing expedition for the hand that Gillian held, as successful.

We returned to the table an orbit later to see Gillian, with vocal chagrin, bemoaning how she’s had to fold two sets recently.  There is protecting information and there is giving it away.  How much would YOU tell your enemies? 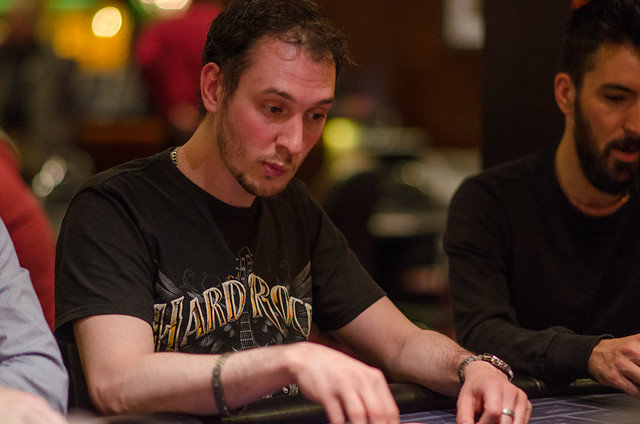 Players of all levels are playing at WPT National Event Newcastle here at the stunning Aspers casino.  With 94 of them still in with a chance of making Day 2 with a stack, people from all walks of life are still in there fighting.  Ian Simpson (pictured) only has 18,500 with just over twenty bigs to his name, but others are faring slightly better.

James Charlton plans on investing in ‘all three bullets’ as he looks to buy in for every flight in this WPTNUK Accumulator format. He’s flying along on 80,000 and looks in a determined mood to add to that chip mountain.  Bobby Brummitt has 28,700 and is scrapping for survival, having bubbled the last event in London.  And Hamza Nasir just pulled off an excellent semi-bluff on the flop of

having raised to 1600 pre-flop and got two callers.  His shove for around 15,800 more after those three cards got two remorseful folds, and he showed

for just the up ‘n’ down straight draw.

Khadir Khoshawy (pictured above) may be leading the way, holding over 90,000k, but he’s not the only person at his table with plenty of chips.  Peter Agnew qualified for his seat for just pennies online at partypoker, and he’s built an impressive stack of 61,000.  Can he spin a micro buy-in up to a massive part of the £50,000+ Prize-pool? 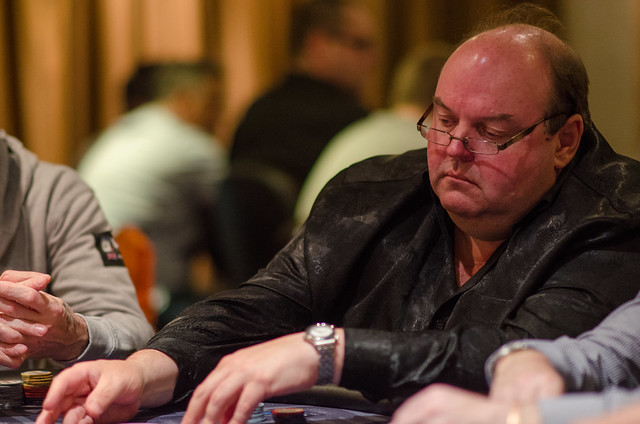 He may have been knocked down by Ian Simpson earlier, but Mike Hill is refusing to exit this WPT National Event quietly, ninja-stack at his table and not laying down anytime soon.  He’s not the only one, with plenty of players near the ten big mark, caught between saving their stack for a while longer or making a move.  Don’t forget, we only have 8 levels in each flight, and with this being an accumulator format, each player has the chance to take THREE stacks through to Day 2… 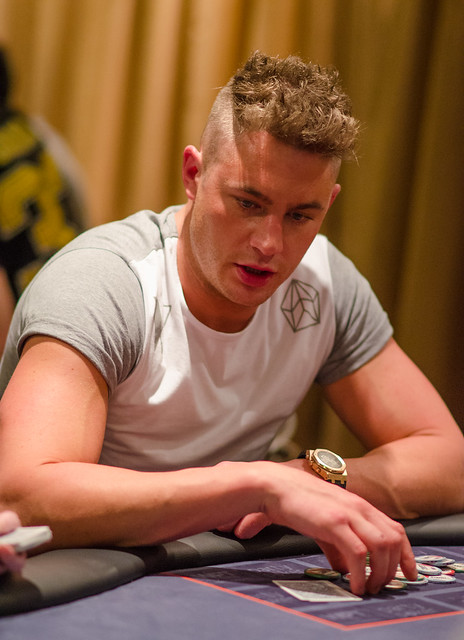 We may have lost Scotty T from Geordie Shore (pictured, above) but plenty of other big names are all still in the WPT National Event Day 1a. With Khadir Khoshawy leading the field with a monster stack of 86,100, here are how a few other well-known names and faces are doing: 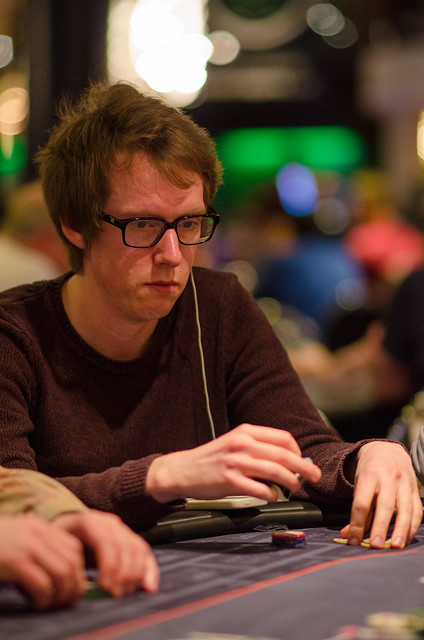 James Brady has left us in Level 4 of the WPT National Event in Newcastle.  He called it off for his tournament life with

to knock him out.  He’ll be back for two more flights tomorrow though, and for now is loving the cash action here at Aspers!

Stuart Hall may have 40,000 chips at the break, and we congratulated him on a great first few rounds.  The champion boxer needs no repair-work doing to his chances, and told us how he feels as we offered him the spit-bucket (not really).

It’s clear that Stuart’s style is very much as aggressive as his tigerish attitude in the ring.  But if he keeps landing his punches, who’s to say he can’t go on and win this £50,000 guaranteed WPT National event?

Not us, he looks as fit as a butcher’s dog…

Shares in hair wax just went up – Geordie Shore legend Scotty T has busted Day 1a of the WPT National Event here in glorious Newcastle!  Yes, it’s the news we feared but local bar-staff prayed for, after Scotty (pictured, right) was low in chips virtually from the off.  Unable to get going at the felt, the charismatic young player – in a poker and life sense – got it all-in with

on a two-heart flop and was unable to hit  the heart…not a problem he usually has on a Thursday night.

Elsewhere, we’ve seen Ian Simpson attempted to dent Mike Hill’s stack after the two gents got it all-in pre-flop.  Ian raised to 2,000, Mike popped it to 5,300 and Ian shoved over the top for 19,000.  A quick call from Mike wasn’t the news Ian was after, as the former IPO champ flipped over

with a rueful smile.  Mike turned over

– just about as wet a flop as Ian could have wished for.

“What a sweat!” he exclaimed, leaning forward, willing the cards he needed to jump up into the dealer’s dexterous hand.

The turn card was the

but the river was a sensational

to give Ian the straight and double his stack to 38,000.  He’s right near the top of the chip-counts now, marginally ahead of boxer Stuart Hall, going strong on 34k.

We’ve had 133 entries here at WPT National in Newcastle, at the beautiful Aspers At The Gate casino.  So with some top names here, let’s bring you a round-up from around the tables as we enter Level 3.

Mike Hill and former IPO Champion Ian Simpson are sharing the felt here on Day 1a, with Simpson certainly the more vocal.  Both men have edged a profit from their starting positions, with Mike using his button to push Ian (two seats to his left) off a pot pre-flop.

“I would have three-bet, you call, we see a flop, it gets messy.” says Ian.

Mike flips over one card of his two, the

“You made the right decision.”

Bobbie Brummitt may not be a name familiar to you as a champion, but the mentally astute amongst you may recall him bubbling our third WPTNUK leg in Aspers, Stratford.  The crestfallen Brummitt had his spirits immediately lifted upon his exit by London Poker Manager John Scanlon, who awarded him a free WPTNUK entry package worth $1,000!

Bobby is therefore up here in Newcastle going for the title with two bullets in his armoury for this accumulator format £50,000 Gtd tournament.

Stuart Hall On His Toes

Of our two celebrity players, Stuart Hall has definitely been the quieter.  Focused on the cards, the other players and his own performance, the British World Champion has displayed all his boxing toughness at the table…but mentally rather than physically!

Having taken his time getting to know the other players he’s sharing the felt with, he’s started picking up chips, and we all recognise that early winning feeling in poker:

Scotty T from Geordie Shore has started a little poorly at his table, losing around 30% of his stack after getting involved in some early skirmishes.  We’re guessing that Scotty isn’t as familiar with live poker as most, and a few times, his lack of positional skill has seen him bullied off pots.  the latest occured on his ‘big blind’ when an aggressive player raised to 325 pre-flop with blinds at 50/100 and Scotty was one of three callers to a bumper pot this early on in the tournament.

slowed action from the rest of the table considerably, with a c-bet from the original raiser enough to take a few more chips from the club-crazy Scotty… as well as everyone else.

Still, he doesn’t seem too downhearted about it…

A Shore Thing… For Stuart Hall?

Two of our players who know all about winning in life are Scotty T from Geordie Shore and Stuart Hall, and here they are, speaking about how much they’re looking forward to taking part in tonight’s Flight 1a of the WPT National Event here in Newcastle!

Here’s their interview with Paul Seaton, do please bear in mind (WARNING!) that there is a tiny bit of bad language from one of our interviewees who was a little bit excited!

With £50,000 in the Prize-Pool, it’s no surprise that some big names are out in Newcastle tonight, as Aspers At The Gate plays host to the fourth stop on the WPT National UK tour.

As well as current IBF Bantamweight World Champion Stuart Hall in the casino, we’ll be joined by Scotty T from the hit MTV show Geordie Shore .  So will the lads have the night of their lives…or be headed for an early bath?