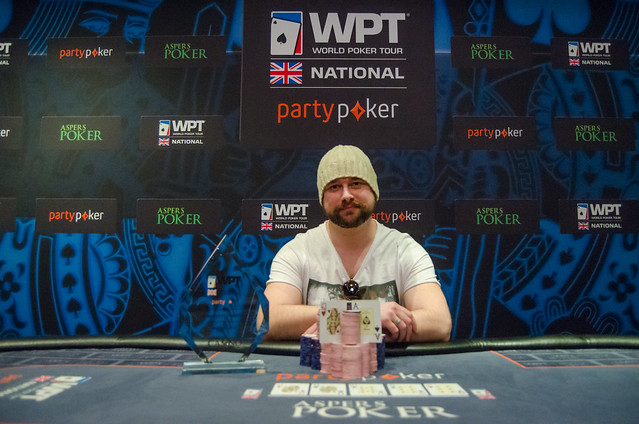 Darren has done it! An incredibly fast play-out today at the Aspers Casino in Newcastle as Darren Mapley has taken down the WPT National Event, beating Mark Gray in 2nd place (£12,245).

The first few hands of Heads-Up were tight and tense, but no more than ten minutes into play, all the chips were in the middle… and destined to land in front of the man in the hat.

Raising to 145,000 pre-flop, Darren got a flat-call from Mark, and the two gentlemen saw a flop of

Darren led out 210,000 and again got a call.  The river brought the money shot though, as another queen, the

.  Darren shoved all-in and was eventually tank-called by Mark.

Darren’s full house was more than enough to win the pot and the title!

Congratulations to all the players involved as we saw 412 entries create a deserving winner in the brilliant Darren Mapley.  Mark wins £12,245 and the $1,000 partypoker last-longer package.

What does Darren plan on doing with the money? Listen to our exclusive winners interview: 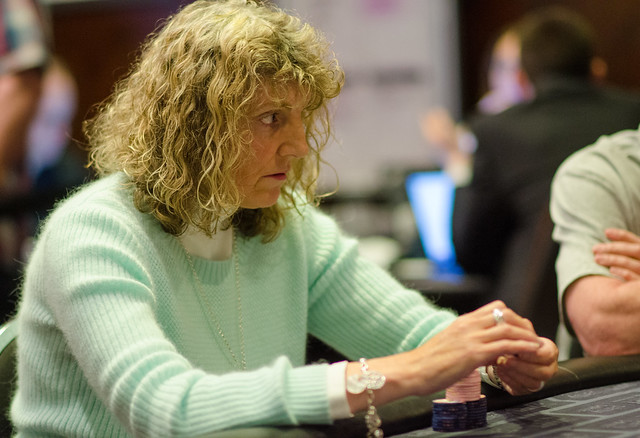 It had to happen – one of Hazel or Mark were going to have to make a move at some point, and Mark Gray has taken the opportunity to go into heads-up with a payable stack and been paid off for that bravery.

.  An ace on the flop was all it needed to see off Hazel, who got the biggest round of applause of the weekend when she finally stood up.  A terrific local player, who didn;t blink all those levels ago with pocket jacks.  She’s run so deep and misses out on heads-up by the cruellest of margins, ending in third place. 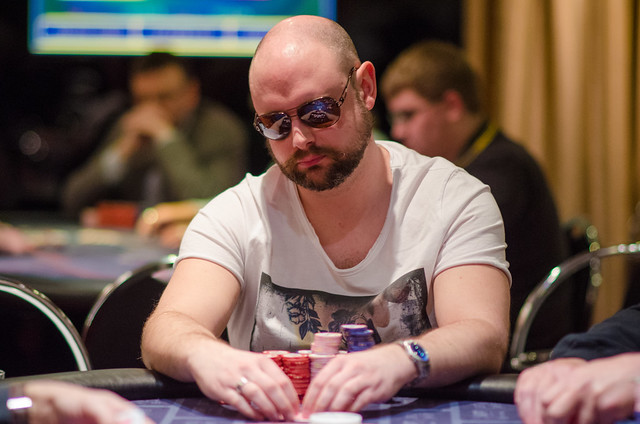 With both Mark and Hazel being partypoker qualifiers, they have an extra $1,000 package up for grabs as a last longer gift from partypoker – two seats to #WPT – National London Event in July and $320 into their party account! 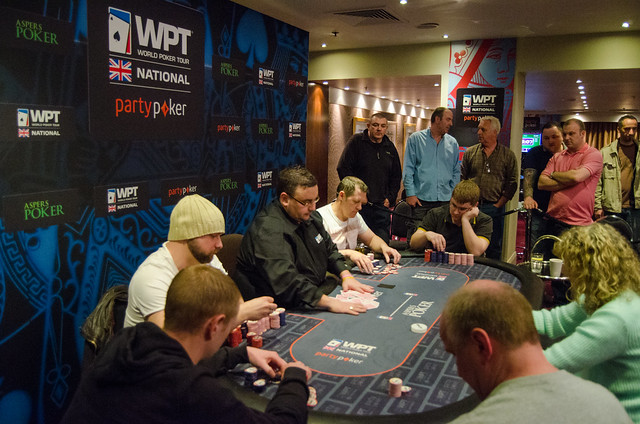 That is NOT the stack shared by the field!  With three players now remaining, just take a look at the chip-counts as the two short-stacks surely battle to try and get heads-up against the massive chip-leader Darren Mapley! 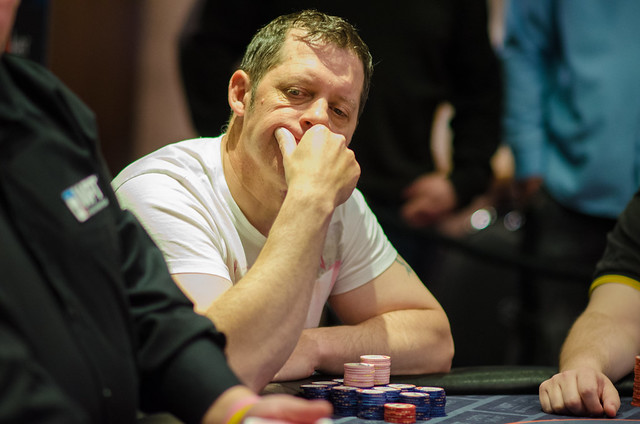 Action has been unbelievable at this final table here in Newcastle as Aspers Casino plays host to one of the most frantic final tables we have ever seen.  It’s truly amazing how fast it is going, with average chips not shallow at all.  We lose Gary in 4th place, and once again, it is the bulletproof Darren Mapley who has ejected yet another opponent on what looks like a march to victory.

but was called by Darren’s

with the board of

A sensational hand has altered the destiny of this WPT National Event title in Newcastle after massive drama and by far the biggest pot of the entire week happened in the blink of an eye at this incredible final table.  We’ve gone from 16 hopefuls to half a dozen attacking players in just three and a half hours, almost unprecedented when we’re talking about over £45,000 still being up for grabs in prizes!

Andrew and Darren Mapley saw a flop of

after a little pre-flop raising put them both in the mood for seeing something to improve their hole-cards. Both players checked that flop – which as you’ll discover looks like the trappiest set-up since Steven Gerrard declared ‘No more slips!’ like he was Aragorn in Lord of The Rings.  On the turn of

the money started piling in, with Darren leading 100,000 which Andrew called.  The river of

looked like a huge brick, but after Darren – brilliantly – checked to Andrew, Hetherington bet 175,000.  Mapley, however, raised to 500,000…and Hetherington sensationally shoved all-in for 2 million!  Mapley snapped him off quickly, and once the cards were on their back, no-one could quite believe it.

A full house has booted Hetherington out of the tournament and given almost all of the chips to Mapley, with Hetherington’s stack of over 2.3 million pre-flop now being piled on top of Mapley’s already mountainous stack.

It will take a huge effort for anyone to take Mapley out of this tournament. 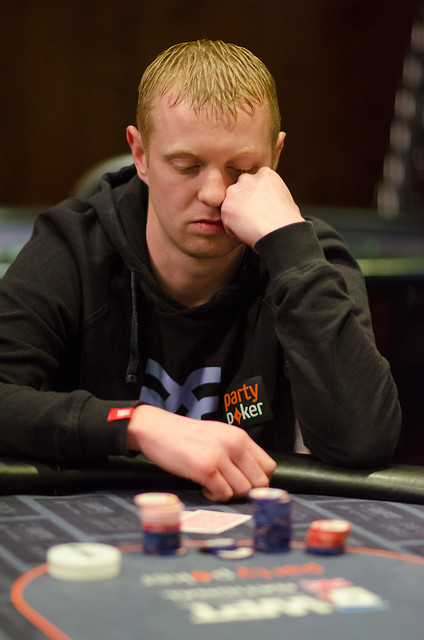 We’ve lost one of the best players of the tournament in young Alex Walton.  Surely a star of the future is made, after the Newcastle-based player proved his talent will go further than the Tyne Bridge this weekend.  His final move of a rollercoaster WPT National Event was when he got it all-in fairly short at just 400k chips with

and was called by Darren ‘Runaway Train’ Mapley’s

put Alex ahead, and the turn of

even opened up the flush draw.  but the two-outer

sent him to the rail to a cacophany of oohs and ahhs and he earns £3,500 for what was a sickening exit for him and his fans.  Mapley looks invincible.

Mark Gray At The Double 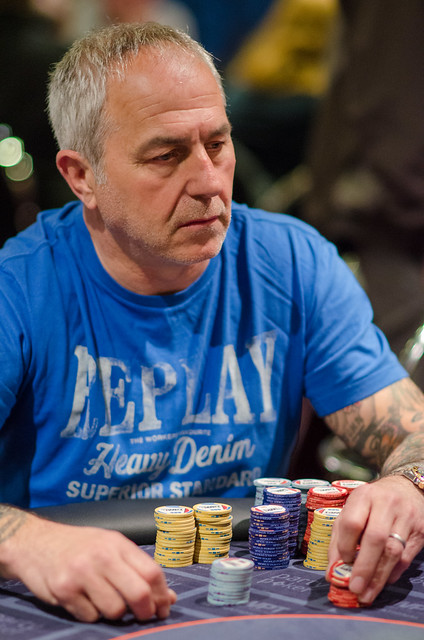 In the next hand, Alex Walton doubled when his

won a flip against Gary Copeland’s

after a ten hit the flop.  His double was worth slightly more, bringing his stack up to around 700k. 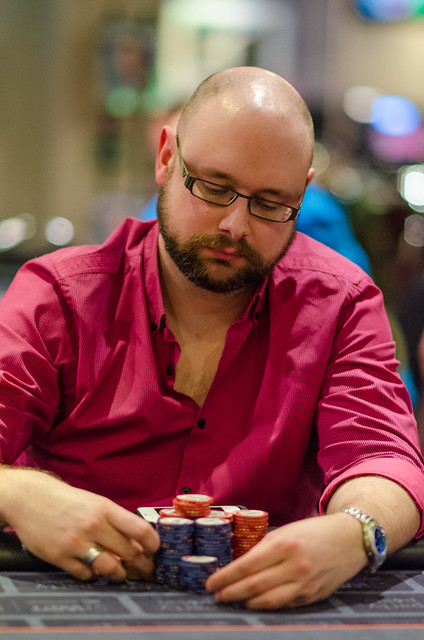 Darren Mapley (above) has just eliminated Mark Harding in brutal fashion to bring us to six-handed play very quickly here at Aspers, to the amazement of the growing rail.  All-in pre-flop with

, Harding was flipping against Mapley’s

… but was drawing almost dead from the flop when it landed

to gasps on the rail!

turn.  Last night, Harding told us he was sick of runner-up finishes and that only a win would satisfy him.  Sadly, his excellent play and vice-like grip on his temperament couldn’t help him against the ‘coin-flip king’, Darren Mapley, but what a great player we’ve seen in Harding, who wins £2,905.  A title cannot be far away. 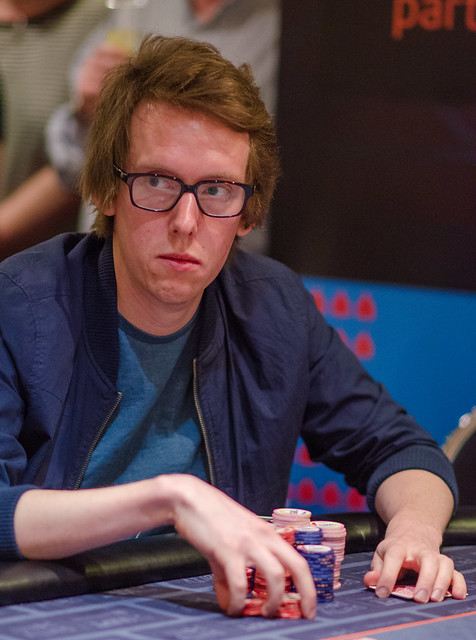 James Brady led the field last night with just 17 players left of the WPT-National Event here in Newcastle’s Aspers Casino, but today he was on the back of  some cold decks as pairs ran into over-pairs and he was outdrawn time and time again.  He’s just left us in the very hand after Rob Patrick busted in 9th for £1,740.

Brady moved in pre-flop with

and was called by Gary Copeland’s

, putting Brady well ahead, but the

river completed a runner-runner straight for Copeland to leave James reeling in the direction of the cash desk to collect £2,325 for his 8th-place finish. 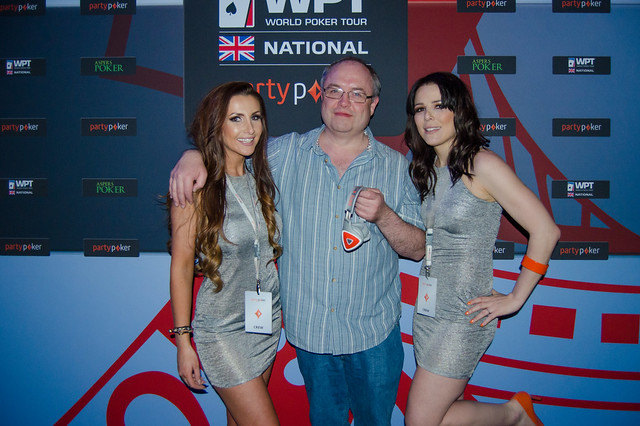 We did promise you a shot of the man with lightning in his dancing feet, David Maudlin, who was one of the winners in the partypoker Players Party dance-off last night at Tiger Tiger up here in Newcastle – and here he is!

Clearly a fantastic night for David as it has been all the partypoker qualifiers, and with Hazel Birchnall, Alex Walton, Andrew Hetherington and Mark Gray all qualifying for this event via the online satellites, we may very well have a winner who has turned in a phenomenal return on their original investment! 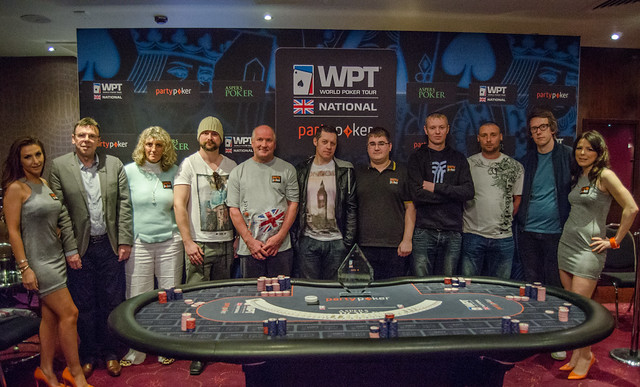 Nine players remain here in Newcastle, as we get ready to see who will take the toon title in our fourth stop on the WPT-National UK circuit.  Here are their chips as the get ready to start final table play!

Kelvin Weeks, who started the day in the top counts at just under a million, busted after two horrible suck-outs.  First, he lost when all-in pre-flop with 6-6 vs. 4-4, a four on the turn costing him a big pot.  Then he was all-in again pre-flop with

which caught a jack to bust Weeks.  Very harsh!

Eldon Orr Out in 11th As Final Table Bubble Begins 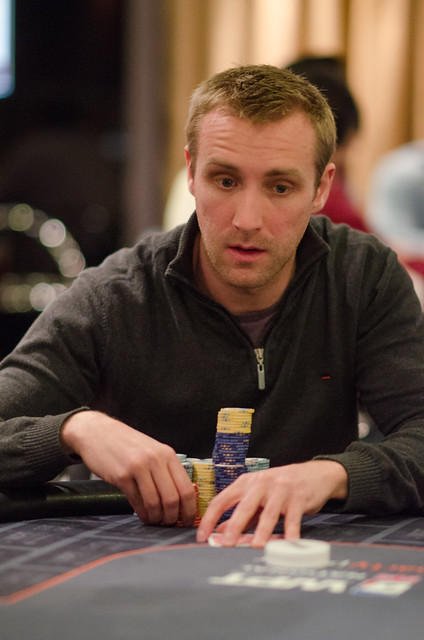 Eldon Orr lost two pots to bust here at the WPT-National Event in Newcastle as the final furlong in this tournament seems to be going by in a blur!  The big pot that Orr lost was to now monster chip-stacked Andrew Hetherington, who started the day with just eleven big blinds, but now is threatening the chip lead!

Orr shoved over-the-top of Hetherington’s opening raise from the big blind with Andrew in the small blind for around 400k, and had

but having been called by Hetherington’s

was in trouble and never caught up.  His last few blinds went in with

which flopped an ace. Orr also takes £1,275 home for his sterling efforts this weekend. 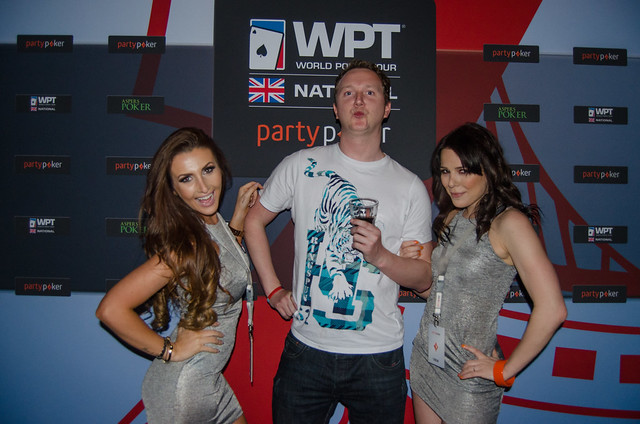 It’s not only the players who made the money who will leave Newcastle as winners this weekend, as last night’s exclusive partypoker Players Party at Newcastle hotspot Tiger Tiger proved.   As well as complimentary drinks, players were treated to a private VIP night none of them will forget/remember without photographic proof.  Prizes were awarded to the best movers and shakers away from the felt for a change as James Mitchell (pictured above) won two tickets to go and see Manchester United play in the Premier League next season, while David Maudlin won an exclusive pair of Monster headphones!

Not So Elementary For Watson 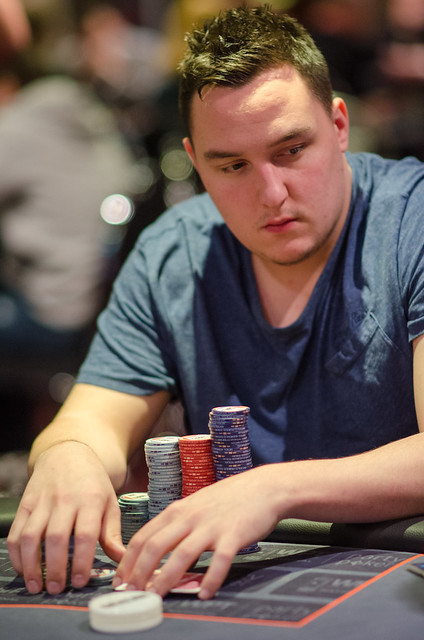 Nathan Watson came into today’s final with just 168,000, and despite lasting 45 minutes into the first level of the day, he was always going to find it tough unless he could double up.  Sadly for Nathan, he wasn’t able to, and he got his final 60k into the middle with

and was called by 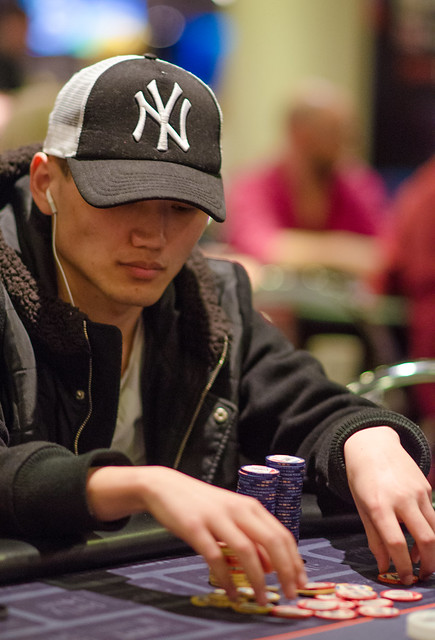 Di Fan has certainly brought some drama to this WPT-National Event over the past few days, but he has bowed out before the final dozen here at Aspers Casino.  With just 148,000 left, he moved all-in pre-flop, and Rob Patrick “…knew it was a bit wild, but…” called it off with

.  An open straight draw from the flop turned golden on the turn for Patrick, leaving Fan to make the short walk to the Cash Desk for his 13th place finish (£1,045).

Our final dozen players are now ready to battle to the final table, with the average stack at 650,000 (32 big blinds).

Here’s a reminder of the players who cashed yesterday in the run-up to our final sixteen gathering today. 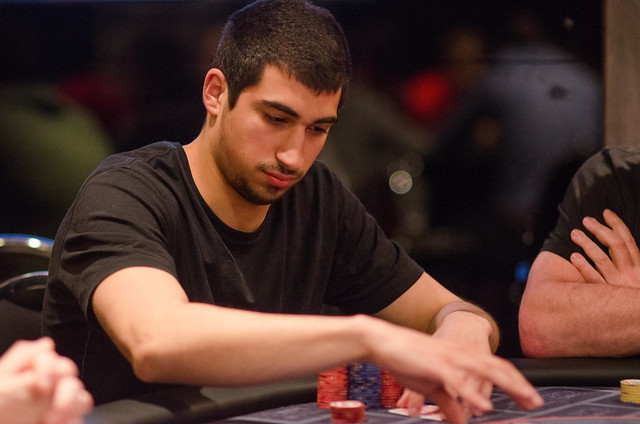 Erol Taynan came into play with just 130,000 chips, which even with blinds going to an hour don’t last long at 1k/20k.  He got all of his stack in pre-flop with

and was looked up by Rob Patrick with

In two hands straight after, two more players departed, with Jack Lam going in 15th (£1,045)when he shoved over a raise with pocket eights and was called by

and a raiser with

isolated and hit an ace to confirm Hamid’s exit. 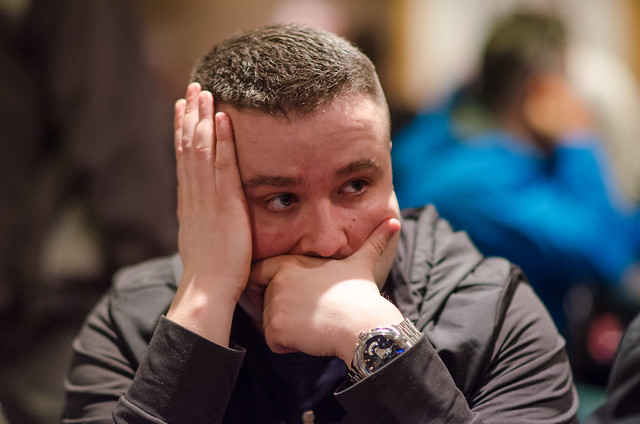 Plenty of our players return to around ten big blinds, so with blind levels now lasting an hour, will they be caught between making an early move and the inevitable laddering to a final table appearance?

Cards are in the air…let’s find ourselves a WPT-National champion! 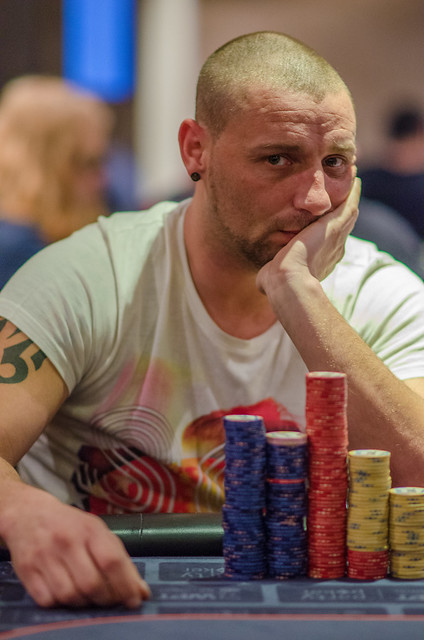 Here are the chip-counts as we enter play here on the final day of WPT National Newcastle at the beautiful Aspers Casino.

Darren Mapley really took control in the late levels of Day 2 and he holds the lead, but with the determined Mark Harding and many other in the rear-view, he’ll need to keep his foot firmly on the gas to take down the £17,500 top prize!