For those who may not be following the WSOP action,  our beloved New Jersey local nosebleed stakes limit & mixed game player, Melissa Burr, has final tabled 2 events at WSOP this month; the $10K Limit Omaha Hi Low Championship and the $1,500 Seven-Card Stud Hi-Low. As if that were not enough, she then added a 9th place finish in the $1,500 Six-Handed Dealer’s Choice earlier this week to her result stats.

It’s tourneys like these that Melissa plans to play from now into the infinite future. In other words, we can expect to see @burrrrrberry in these fields forever. See what I did there?

Last night, she bagged an above average stack in the $50K Champions Event (a 5 day event featuring an 8 game rotation) and is the last female standing among the 55 remaining players. To say this field is tough would be like saying cheesecake is “sorta yummy”.  Some of the best players in the world are present in this field, including the likes of Doyle Brunson, Jonathan Duhamel, Andy Bloch, Jason Mercier, Phil Ivey, Eli Elezra, Scott Seiver, David “ODB” Baker and Matt Glantz. 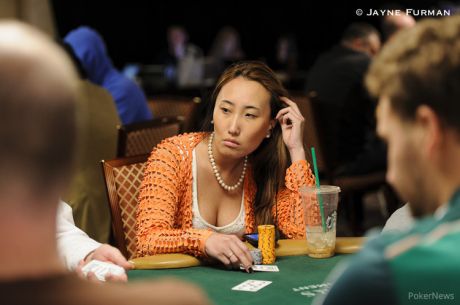 If Melissa bags chips tonight, it’s quite likely that she will make history by becoming the first woman ever to cash in this event when they get ITM sometime early on Day 4, by my estimation. Again, no female player has ever survived long enough to even min-cash this event. Ever.

I believe that’s about to change.

Robert Mizrachi, on the other hand, obviously disagrees. He gave her 15:1 that she won’t cash. FIFTEEN-TO-ONE. She took the action, obviously.  Our very own #teampartypoker player Scott Baumstein and iconic commentator David Tuchman both gave that decision their emphatic endorsement during their WSOP live-stream discussion last night. They think Mizrachi got his money in bad on this one and cited Ms. Burr as someone who’s not to be underestimated.

Burr has a skill-set that renders her capable of surviving the bubble here – no doubt. What gives her even more of an edge, though, is that she has a positive and grateful attitude, which can only be a catalyst for more success. When we spoke last night after the chips were bagged, she told me “I know I belong here”. And please let me be very clear on this: that statement was made without a shred of arrogance.

Although Melissa has faced off against (and beaten) highly respected and successful players from all across the globe, she remains one of the most humble, down to earth people I’ve ever known. She never ceases to be surprised when she’s approached by a poker journalist for an interview. “They want to interview ME!” she exclaimed. “Wow”, she said with an air of disbelief, “What a compliment!”

She says her WSOP experience so far this summer has been “so surreal” and she’s ready to embrace whatever comes next.

But for now, she’s got a prop bet to win.

Head To Vegas with partypoker Today!

Qualifiers are running now on partypoker and you can win your seat for as little as $1. Play for a $1,700 WPT500 package that includes the buy-in, four nights accommodation and travel and spending money. Or, simply play for a seat only, you can win multiple seats to give you more shots at the first prize.